AN ANALYSIS OF UTILITY NETWORK USE CHARGES FOR ROOFTOP SOLAR: WHAT’S FAIR?

Solar energy will be a major part of Alabama’s energy supply and is crucial in cleaning up our air. Solar energy receives widespread public support, but policies at the state and utility levels have not reflected this enthusiasm. In 2015, the Solar Energy Industries Association ranked Alabama 49th in the nation for installed solar capacity.

There is good news, though. On September 1, 2015, the Alabama Public Service Commission approved Alabama Power’s petition for 500 MW of renewable energy capacity. In northern Alabama, the Tennessee Valley Authority is purchasing 80 MW of solar capacity from a solar farm in northern Alabama. Where industrial and commercial solar are growing in Alabama, there are still many barriers for residential customers who want to install their own solar systems ­— particularly in Alabama Power’s service area.

One of the most important factors for growing the solar energy industry is establishing policies and rate structures that fairly value the energy put onto the grid via rooftop solar systems. As is the case with other fuel sources for electricity generation, a number of factors should be considered and weighed to determine a fair value for solar energy. A net analysis of costs and benefits of solar will look at: avoided fuel and energy costs, avoided investment in power plants, a fixed cost for fuel source and the environmental and health benefits.

What is Solar Energy?

Solar energy is the conversion of the sun’s radiation into sources of power, like electricity. A location’s solar radiation depends on numerous factors: geographic location, time of year, landscape, and weather. There are several ways solar energy is deployed: residential panels (PV), community solar installations, and utility-scale solar farms. Alabama receives sufficient solar radiation to produce ample solar energy, yet the state ranks near the bottom for both installed capacity and jobs.

Solar energy does not emit carbon and other harmful pollutants associated with traditional sources of power and the sun is an infinite resource for energy generation. It’s also attractive because it can provide autonomy. Residential solar systems can help customers reduce their electric bills and give them the power to control their energy consumption. 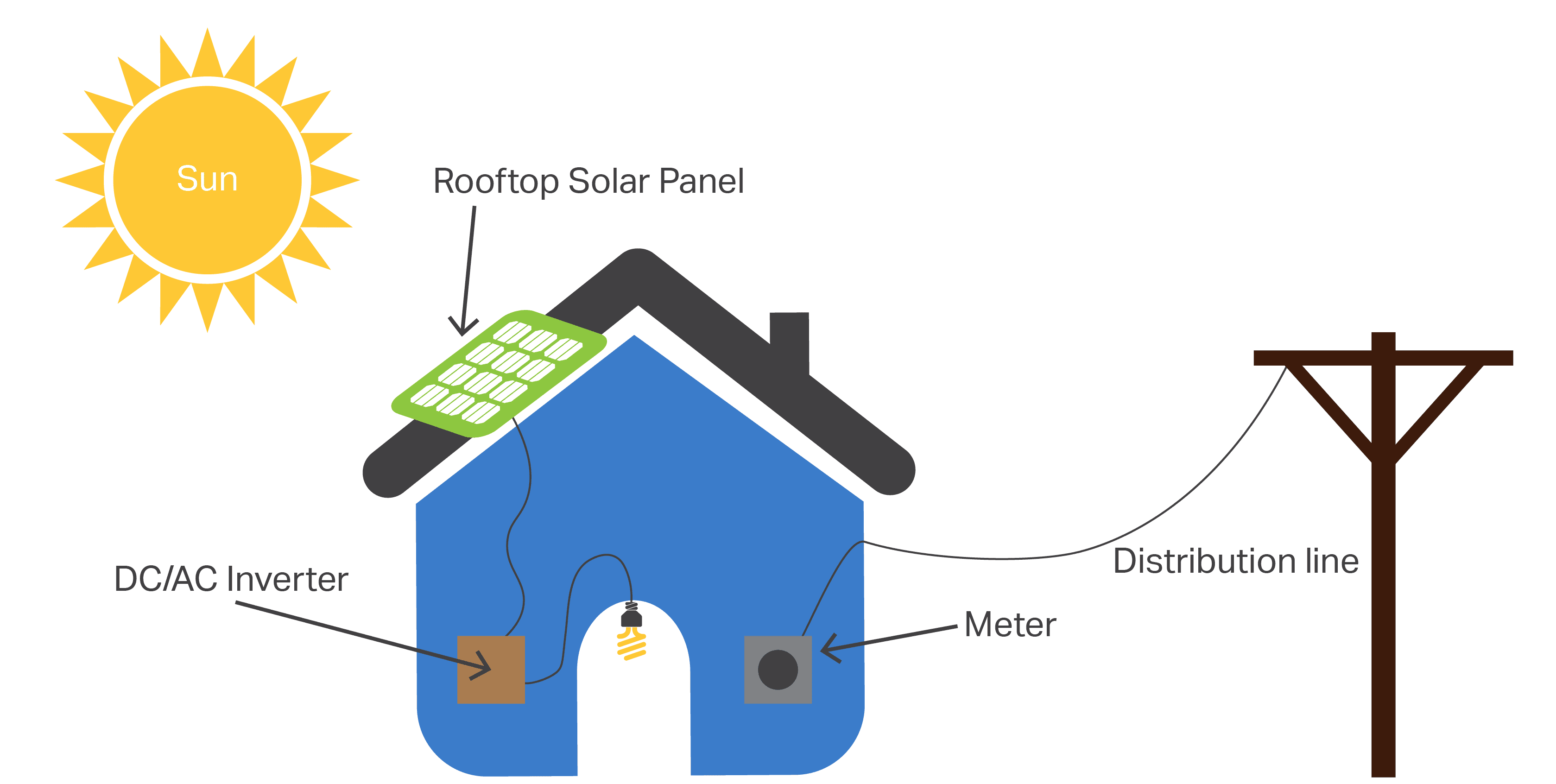 The Solar Energy Industries Association defines net metering as, “a billing mechanism that credits solar energy system owners for the electricity they add to the grid.” Forty-five states have net metering policies: Alabama is not one of those states. Net metering means that a rooftop solar owner who is connected to the utility grid is credited at the retail rate (nationally, as of 2016, 12.21¢/kwh for residential customers) for electricity delivered to the grid.

Net metering typically pays at the retail rate, but there’s no hard and fast rule. Without a net metering policy, the amounts paid to utility customers in Alabama is completely within the utility’s discretion. Alabama Power customers billed under Rate PAE are only paid about 3¢/kwh for electricity they contribute to the grid.

What is a Fixed charge for rooftop solar?

Generally, a fixed charge is a fixed expense that occurs on a regular basis in order to create more predictable budgets. These fees are often based on the utility having fixed costs. There are essentially two types of fixed costs: customer-specific and systemwide.

CUSTOMER-SPECIFIC. This includes factors such as metering, billing and maintaining the transmission line from the distribution system to the house.

SYSTEMWIDE. This means running the electricity distribution system as a whole, so, for example, the cost of maintaining distribution networks in residential neighborhoods.

Some utilities across the nation have increased fixed charges that customers with rooftop solar pay. However, fixed charges for solar single out specific members of a utility’s customer class, which is against recognized best ratemaking principles.

Alabama Power currently imposes a $5.41 per kilowatt monthly “capacity reserve charge” on solar and other types of distributed generation. This charge affects not only rooftop solar and residential customers, but also small businesses and schools who rely in part on solar installations to offset the energy they consume and buy from Alabama Power.

In the instances on below, such proceedings at regulatory bodies involved not only public scrutiny, but also in depth and technical analyses to support or reject the approval of a fixed charge on customers who have installed solar. Furthermore, these states either have more solar capacity than Alabama or net metering policies — or both.

Alabama Power’s PSC-approved $5.41/kW capacity reserve charge unfairly burdens customers with rooftop solar and unjustifiably affects their energy choices. Such fixed charges are based on theoretical cost-shifting approaches that are unsupported by data. In other words, the punitive fees Alabama Power charges its customers aim to solve a problem that doesn’t exist and ultimately do more harm than good by hampering Alabama’s fledgling solar energy industry.

Factors to Consider in a Fair Value of Solar Analysis

This would be the most straightforward calculation. Energy produced by solar customers is energy that the utility does not need to purchase. Similarly, solar customers can deliver the equivalent of capacity, displacing the need to purchase this capacity elsewhere.Embedded in this value are the net economic impacts associated with avoided fuel costs and the net impacts on generation and power plant Operation and Maintenance costs. TVA included in their Value of Solar analysis in 2015 the value of marginal system energy, fuel, variable operations and maintenance and start-up value of generation displaced by distributed generation.

Distributed solar projects generate energy at the point of use, reducing consumption of energy from the utility grid. Studies have shown that the cost of deployment for solar generation is negligible at low penetration and remains manageable for a solar capacity penetration of 30%. Accordingly, the relief solar customers provide to a utility purchasing capacity elsewhere should be fairly compensated. Transmission and distribution line-loss are usually calculated separately from one another because values differ for each system. Solar power generators should be fairly compensated by the utility when they export power to the distribution grid when solar generation exceeds load.

Solar energy production does not depend on commodities whose prices fluctuate on short term scales and will likely escalate substantially over the long term. Accordingly, because the fuel source, the sun, is free and finite, solar energy production is a low risk investment and should be valued accordingly. A fair value of solar should reflect that distributed solar systems provide insurance against future fuel price uncertainty while adjusting for any increase in using traditional fuels at conventional power plants to accommodate for intermittency in solar production. In their Petition to install up to 500 MW of solar, Alabama Power cites renewable energy generation as a means of protecting the “continued supply of cost effective electric service by protecting existing loads.”

As more solar and distributed solar is implemented, environmental benefits occur as conventional generation is displaced and their related pollutants are reduced. Solar energy should be evaluated the same as any new source in terms of environmental benefits. The emissions values assigned on a dollar/ton basis should be similar to those used to evaluate other electricity generating resources. Similarly, solar can impact O&M costs for associated pollution control equipment. Solar market penetration is just becoming significant, so the calculation of these impacts is subject to different assumptions and methodologies. So while environmental benefits should be factored into valuing solar fairly, benefits embedded with costs in other categories should not be double-counted.

As previously mentioned, the solar energy industry created 1 of every 50 new jobs in 2016. Distributed generation can cause regional job and economic growth. TVA included in their Value of Solar analysis in 2015 economic development as it relates to program design considerations. In their Petition to install up to 500 MW of solar, Alabama Power cites renewable energy generation as a means of “enhancing the chances of the state’s leaders attracting new industry and growing the job base for citizens.”

When energy generation becomes more democratized, customers have more choices. Customer choice helps create competitive energy markets, which is definitely a benefit. Furthermore, it’s important to remember that this doesn’t apply only to large corporations. Individual customers deserve choice and autonomy as well. The TVA analysis also cites customer satisfaction as “enhanced customer value due to preference, optionality or flexibility.” In its Petition to install up to 500 MW of solar, Alabama Power points to customer demand as an impetus for filing the Petition by saying “the Company is now receiving inquiries from existing and potential customers as to whether the Company can facilitate those customers’ compliance with internal corporate goals relating to renewable energy consumption, carbon footprint reduction or both.”

With such an abundant solar resource, Alabama should not be ranked in the bottom 10 nationally for solar capacity. Although Alabama Power and TVA have made important strides in the past year to growing Alabama’s solar energy industry, regulatory and policy barriers still exist that impede the growth of rooftop solar. The PSC should not have approved the $5.41/kW charge that unfairly burdens Alabama Power customers who want to install rooftop solar. Utilities and regulators in Alabama should be promoting and approving policies that allow Alabama to benefit from the job growth, customer autonomy and environmental benefits of solar energy. A major step in realizing these benefits would be the PSC revisiting the $5.41/kW charge and considering public input and justification for reducing or eliminating the charge.